From Vulnhub “The purpose of this CTF is to find all six flags hidden throughout the server by hacking network and system services”.

The first thing I to do once the IP address is identified is to see what’s running.

This clue had me thinking that the flag is contained within an image.

The landing page of the webservice on port 80 is the image of the SkyDogCon CTF. I used wget to pull the image and then explored the exif data with exiftool.

Sure enough flag 1 has been found.

Since the flags use an MD5 hash, I was curious if they could be hashed messages.

A quick trip to crackstation and my curiosity was validated. The first flag traslates to: Welcome Home

The 2nd flag clue is "When do Androids Learn to Walk?"

Ok, that one was pretty obvious, so a quick look at robots.text and the 2nd flag is found.

Ok then, time for flag three.

The clue for the 3rd flag is a little more ambiguous. "Who Can You Trust?"

I examined the image for hidden gems but came up empty. The source of the /Setec folder contains some commented java script. It appears to be the standard Google tracking script with a neat Easter egg.

This is another reference to the movie Sneakers. James Earl Jones played the NSA agent Bernard Abbot and voiced Darth Vader.

I navigate to http://10.0.2.30/Setec/Astronomy/ and I see that it has indexing enabled. Inside the Astronomy folder is a zip file called Whistler.zip. I didn’t realize it yet but this is yet another reference to Sneakers.

I pulled down the zip file and noticed that it’s password protected. I used fcrackzip and rockyou.txt to crack it.

Flag 3 has been found!

This flag translates to yourmother

Contained in the zip is a text file titled QuesttoFindCosmo.txt the text in the file is:

The clue for the 4th flag was "Who Doesn’t Love a Good Cocktail Party?" The clue didn’t help. This is where I was stumped. I reached out to @jamesbower for a clue. He mentioned that the CTF follows the movie Sneakers in chronological order. I had not seen Sneakers since the 90’s probably and didn’t remember most of the movie.

I rented Sneakers from Amazon and gave it a watch.

The scene that held the answer was painfully obvious. While I was watching the movie I had also managed to find a script online. I used the script to create a wordlist that I could then use with Dirb.

I copied the Sneakers script into a local file to run cewl from my localhost to improve performance.

At the same time dirb found the hidden folder with the next clue the scene that held the answer to find the flag came on.

The scene with the clue as described from the script:

I checked dirb and saw that it too had found the hidden folder.

This was different than the rest of the flags. All the past flags referenced the clues used to find the flag. This one however was different.

I Googled Leroy Brown and Sneakers and came upon the karaoke scene where they sang Leroy Brown at the Dim Sum bar.

Inside the PlayTronics folder is a pcap file called companytraffic.pcap. The clue for the 5th flag is "Another Day at the Office" This clue didn’t help me too much.

I downloaded the file and explored it with WireShark. Most of the traffic was encrypted, but at the end of the pcap was some traffic sent over http in clear text. Upon further examination I realized that it contained an audio file.

I extracted the audiofile with tcpflow.

I then check the file with the file command:

I listened to the file and I could hear Dr. Werner Brandes say "Hi, my name is Werner Brandes. My voice is my passport. Verify me." It was a recording from the movie.

I tried to use this string to find yet another hidden folder. I couldn’t find anything so I thought that this clue was telling me that I had to log into ssh. Especially since in the movie they were trying to get Dr. Brandes to say these words so they can gain access to a restricted area.

The previous flag said leroybrown and knowing that they sang Leroy Brown at the Dim Sum bar, I thought that scene would give me the clue to login to ssh.

During the karaoke scene, Liz used the alias Doris while she was seducing Dr. Brandes. I figured the password would be leroybown based on the previous flag. I then assumed the username would be Doris.

I was wrong. So then I figured that the username had to be related to Dr.Brandes. I tried several permutations of the username using Dr. Brandes name, then finally tried wernerbrandes with the password leroybrown. And access was granted.

When I hit up crack station to crack this hash, I was surprised to discover that it had not been cracked. The clue for the last flag is "Little Black Box"

Now that I had access I knew that the next step was to get root.

I started by looking for files that were world writable and found one called sanitizer.py.

Usually when a file like this is found, it is run via a cron job as root. I didn’t see that this file was called by any cron jobs, but the script deletes the contents of the /tmp directory. I created a test file and placed it in /tmp and a short time later, the file was gone. I knew this was my escalation point.

I fired up a netcat listener and a reverse shell was born.

I now had root and the final flag.

The 6th flag didn’t yield any results from crackstation either but when I navigated to the hidden folder I was greeted with a video from the Karate Kid playing the song You’re the Best Around. 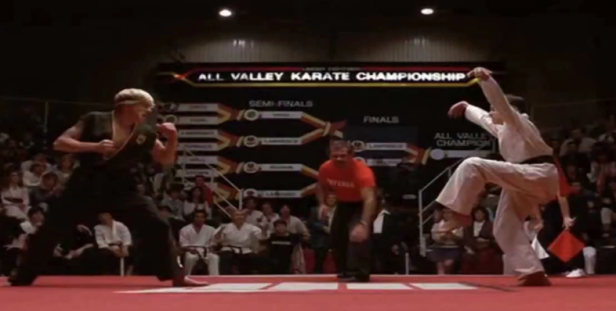 This CTF was pretty captivating. I really enjoyed the OSINT challenge mixed in. It was a nice change from the other boot2roots. I always get a thrill out of getting an opportunity to use new tools and learning new techniques. This CTF delivered and I look forward to the next SkyDogCon CTF.

A big thanks to @jamesbower and the @Vulnhub team.